On Tuesday, January 10th, Walgreens opened a new 2 story flagship store in downtown Chicago, on the northeast corner of Randolph and Washington Sts. This is a 2 story, 21,000 square feet store that tests several new concepts for Walgreens, such as a sushi bar, a very expanded liquor selection with wine from $6 to $450(and I spotted what appeared to be a liqueur bottle in the liquor case that was $2000!), a pastry counter, a juice, smoothie, and self-service fro yo(as in the Asian style tart frozen yogurt popularized by Red Mango, Pinkberry, etc.) station, and finally a nail bar in the beauty section that starts at $10-15. Can't find this particular article at this moment, but I did see an earlier one in one of the business papers where someone in Walgreens was interviewed, and stated they were considering opening something like 3 to 4 dozen more stores like this, throughout the country.

Let's cut to the case, and get to the pictures, shall we? Brief captions are below each pic, with some occasional silly humor thrown in. That's just my own style. 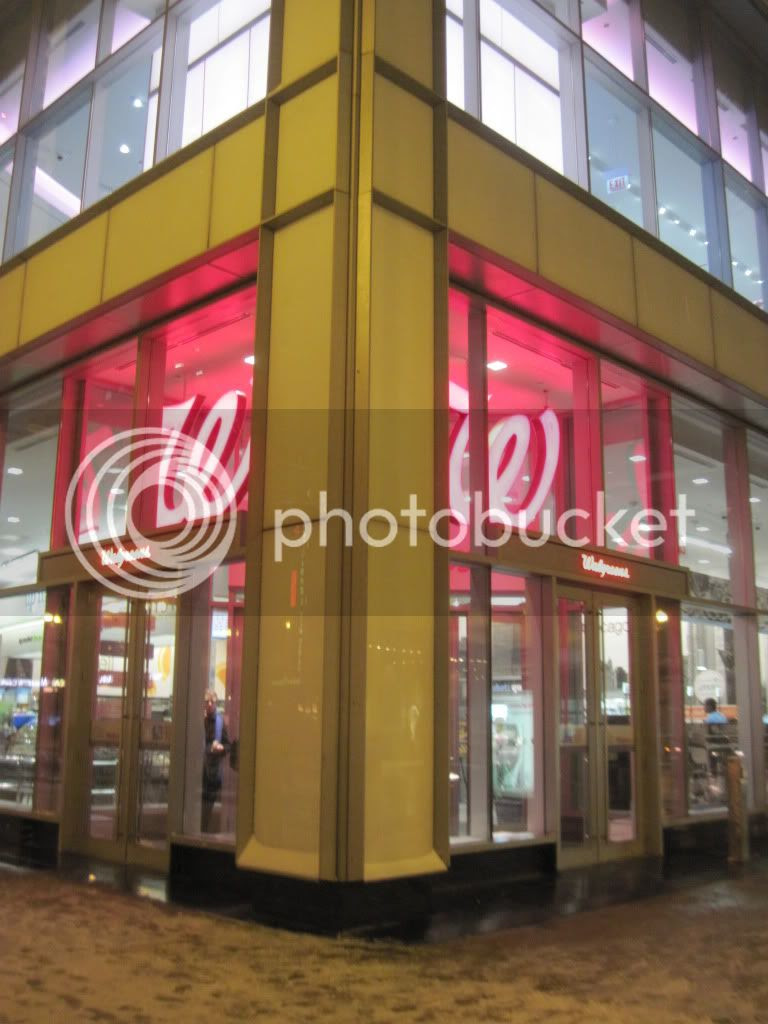 The entrance to the store. 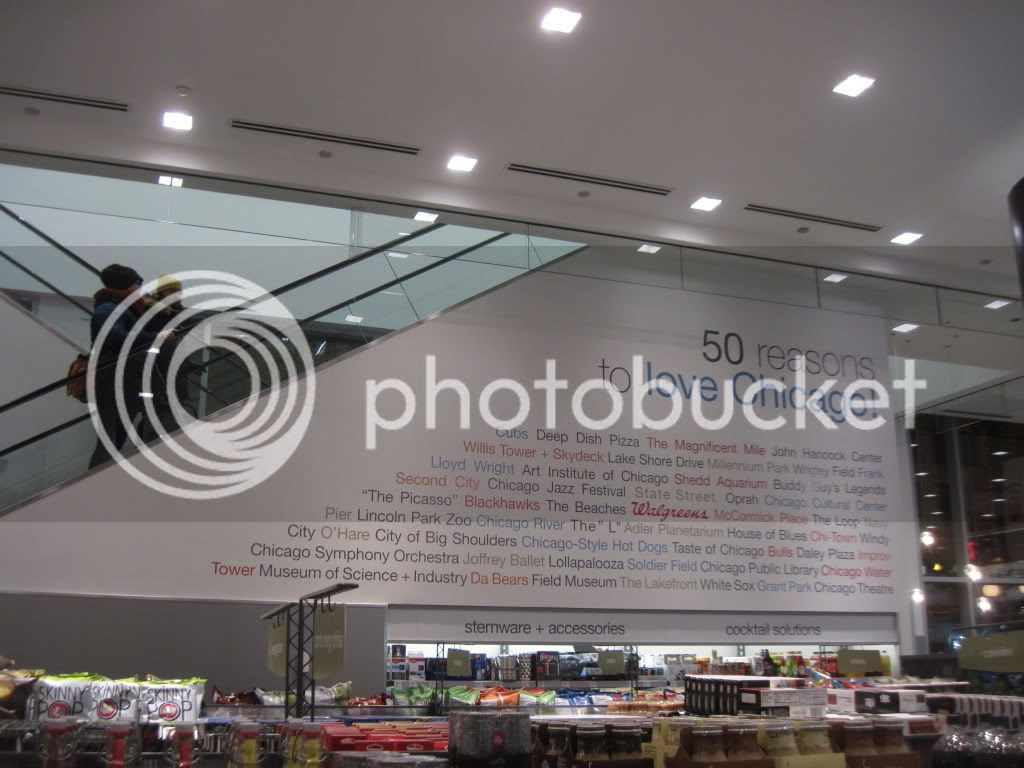 Walgreens is supposedly supposed to be one of the 50 reasons you love Chicago the most? Then again we are inside well, yeah! Kudos for not forgetting the Picasso.... 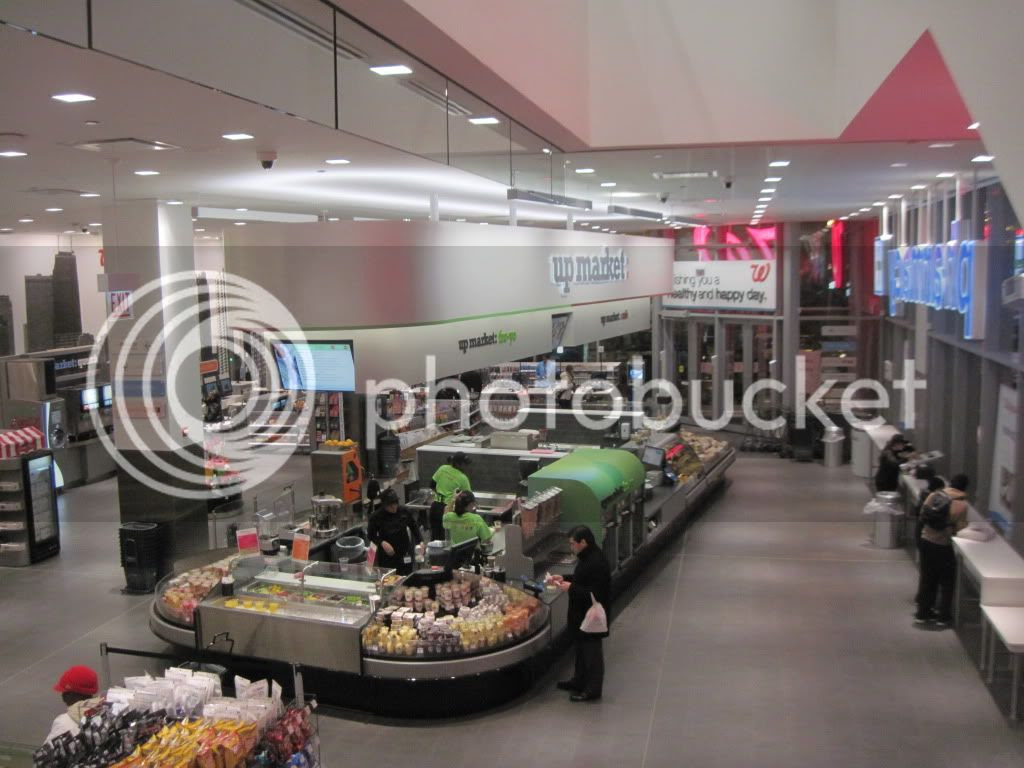 Front half of the first floor. From front to rear going counterclockwise, the juice and smoothie counter(and I want to say you also can order milkshakes), the self serve 'fro yo' machines with a topping station on the left, a pastry counter, and the sushi bar in the rear, or the front if you enter through Randolph/State. And the cheesy 'Wishing you a healthy and happy day' banner sign, which hangs over both entrances. 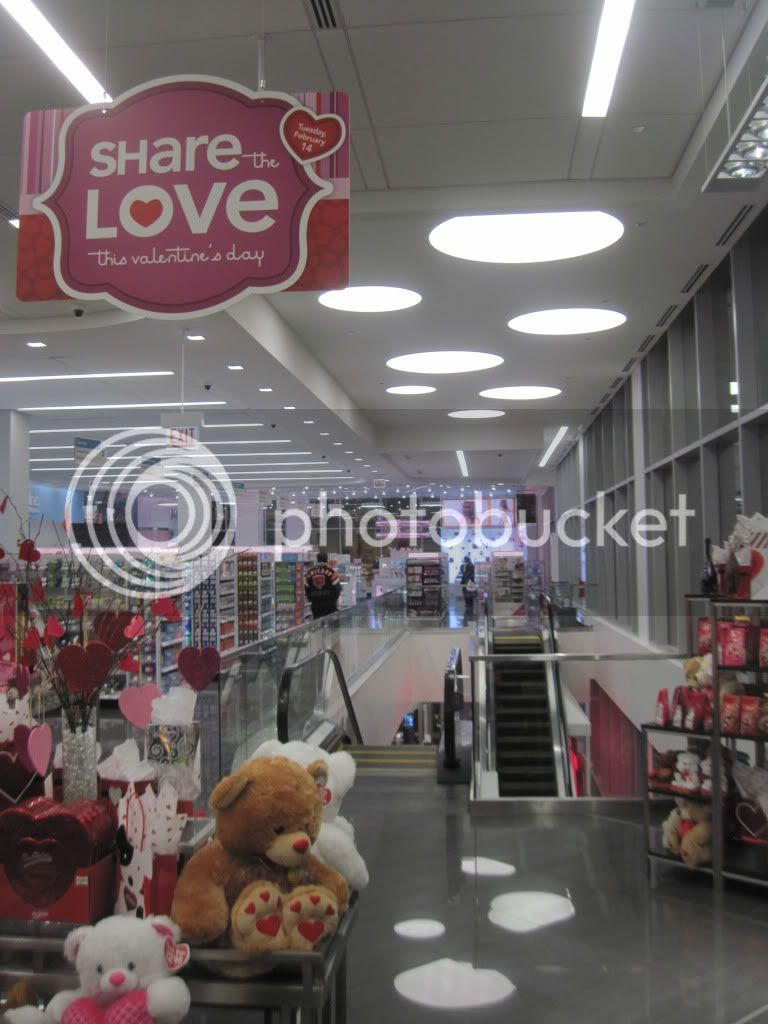 The view on top of the escalator, looking south from the seasonal area, towards the beauty section. The circular ceiling lights are a great touch, over the escalators. 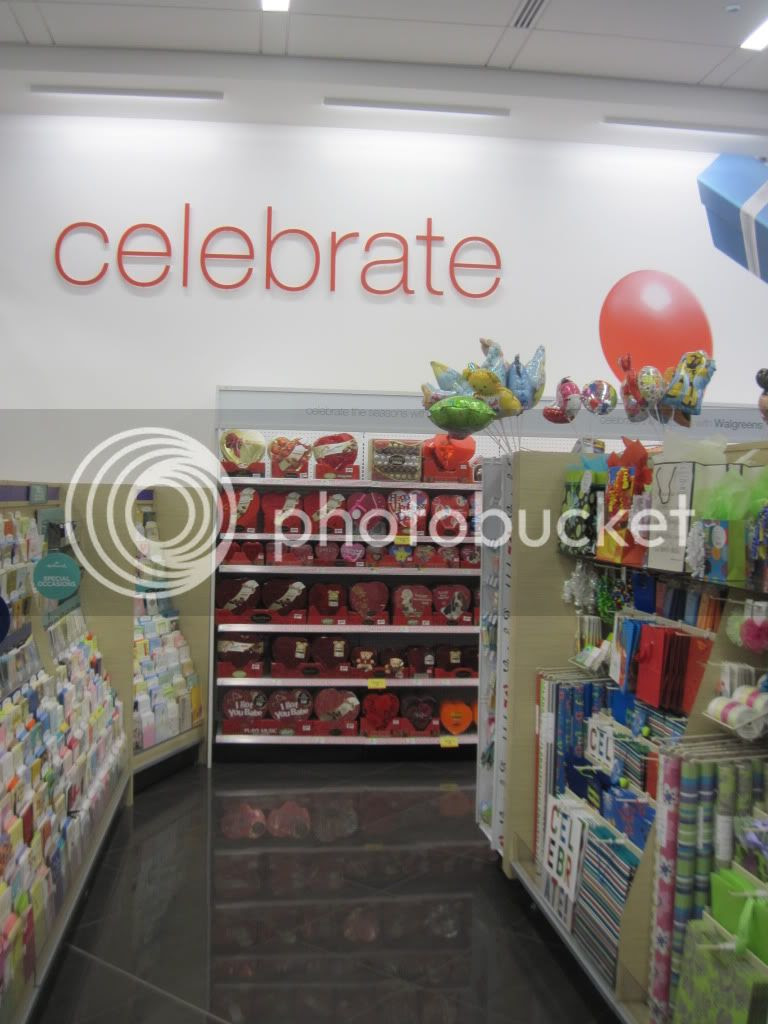 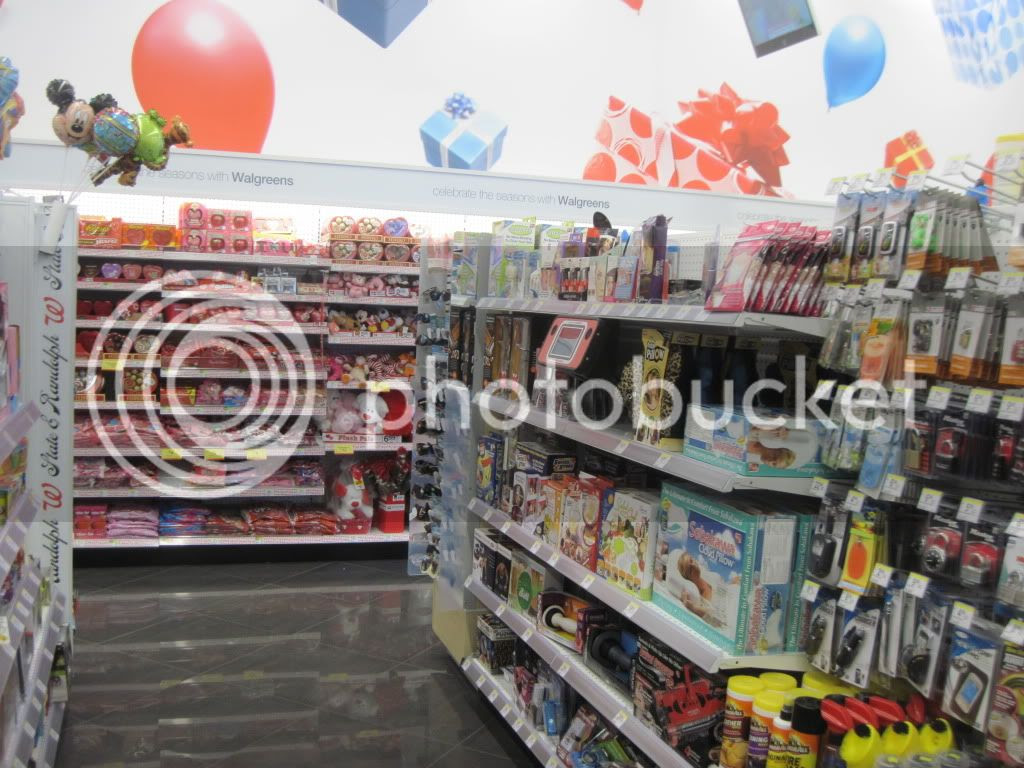 A few shelves devoted to As Seen on TV products, oh yeah! 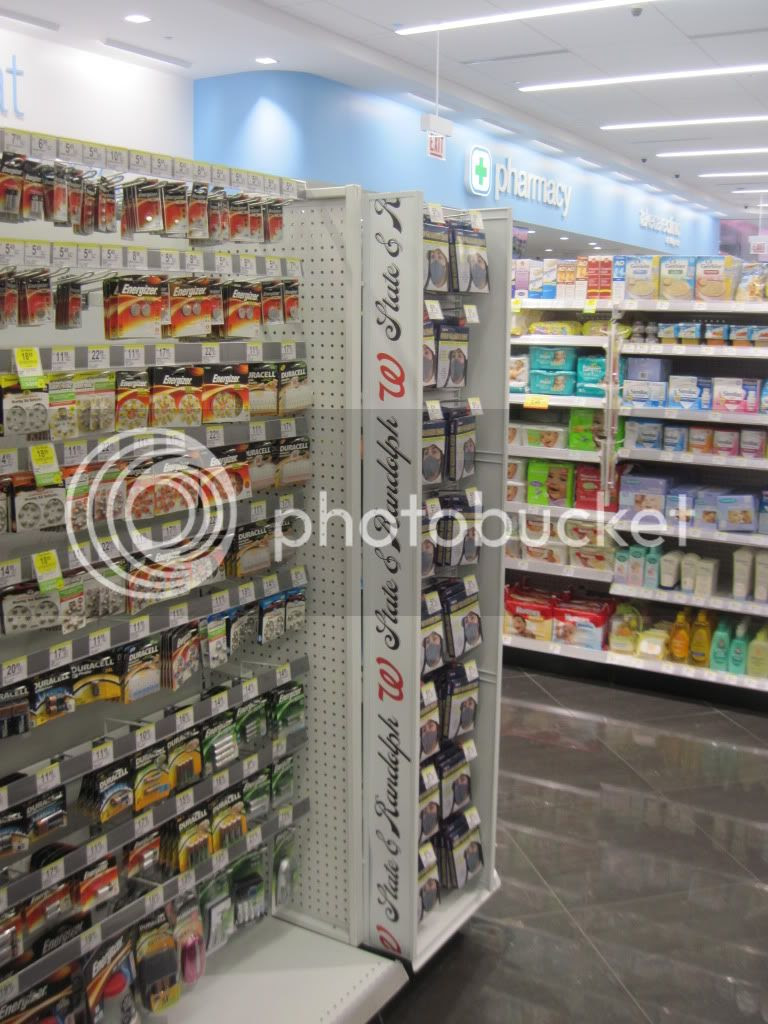 The special logo Walgreens used, for aisle end displays throughout the store. 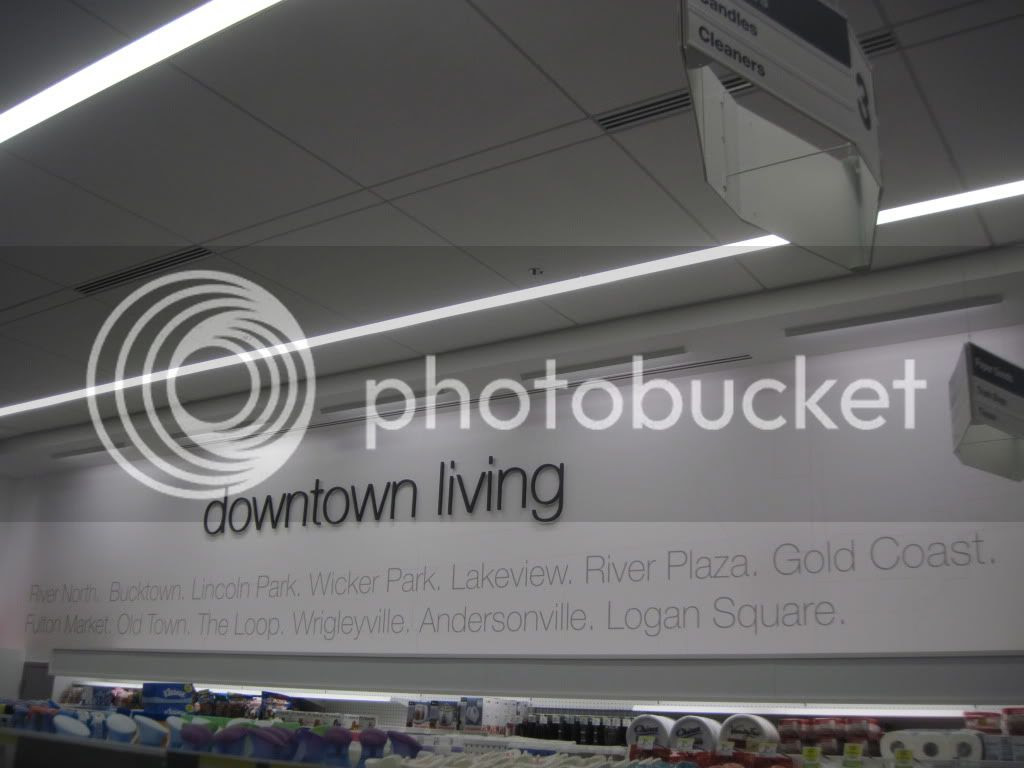 Well, that's a VERY BROAD definition for downtown Chicago, isn't it Walgreens? With this broad of a definition, they sure forgot to mention Hyde Park, Pilsen, and etc! 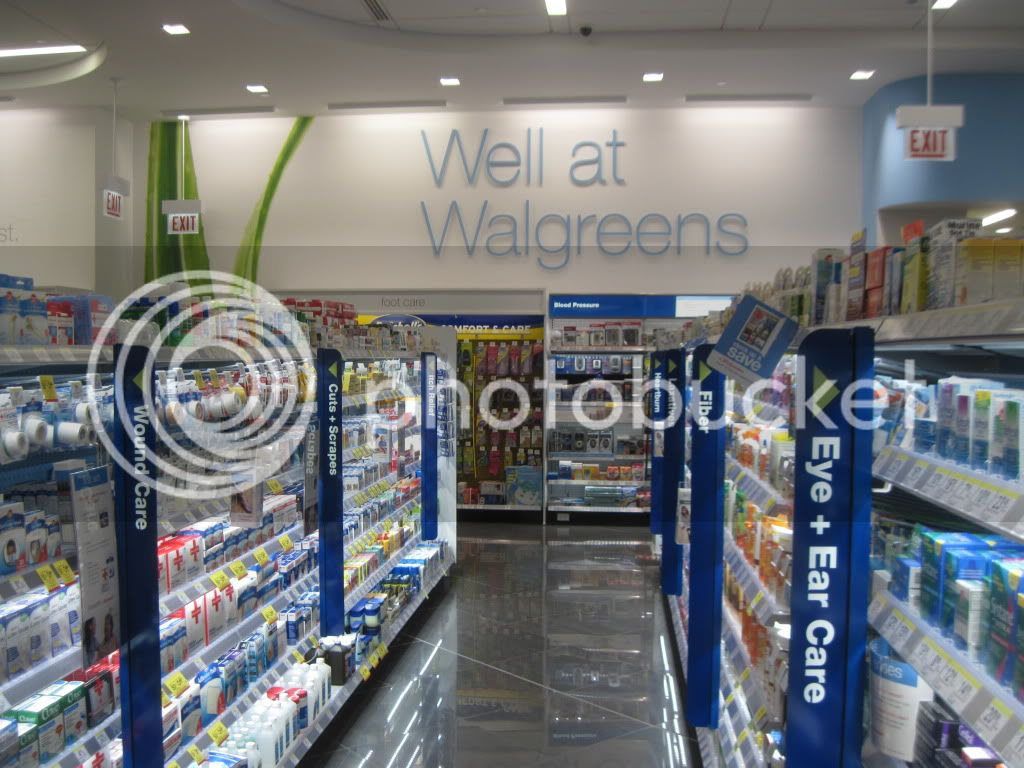 An example of the new look Walgreens is implementing in their stores. I had only seen this new look implemented(sans the sushi bar, self serve 'fro yo', etc. features) in 2 stores(one new store, and one renovated store), previously. 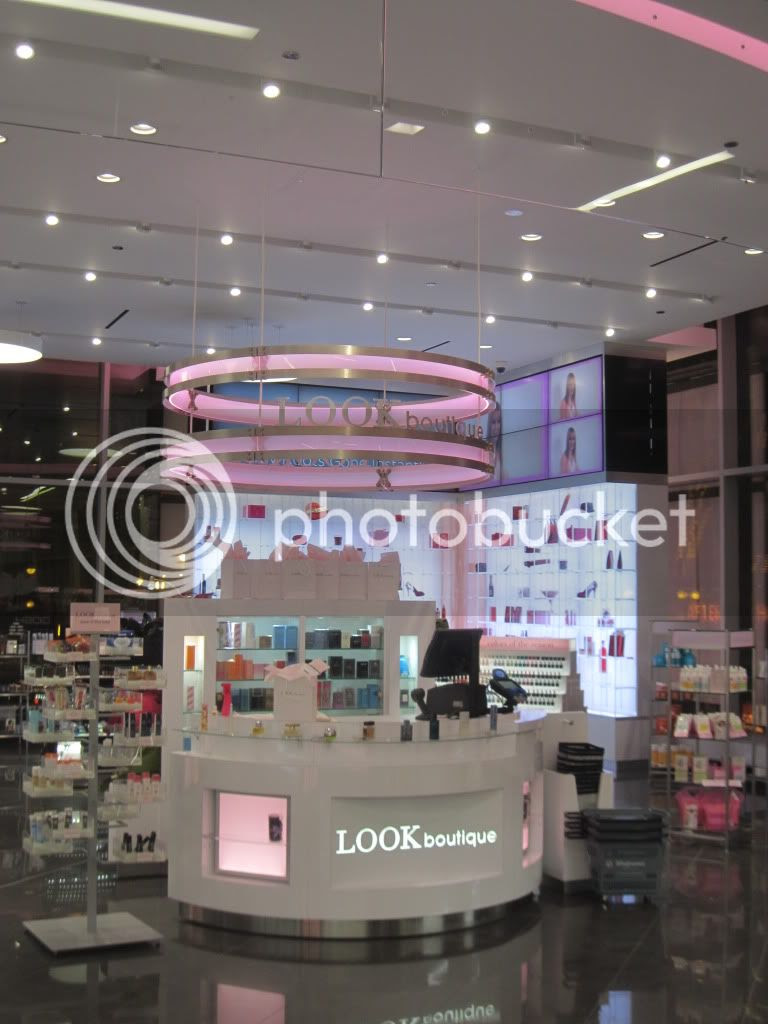 The Look Boutique counter, and a bright corner display and computer monitor display behind it. 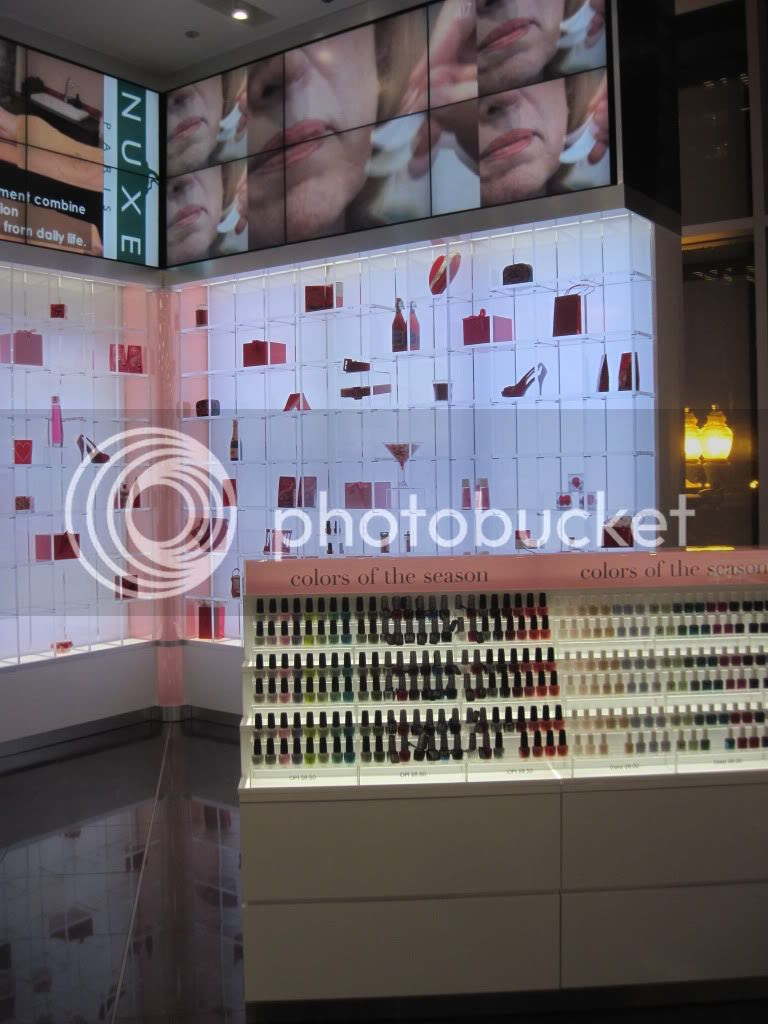 Makeup display, and closeup of the bright corner display from the previous shot. Where is Dustin Hoffman's Tootsie character, when you want 'her'(him) to show up? 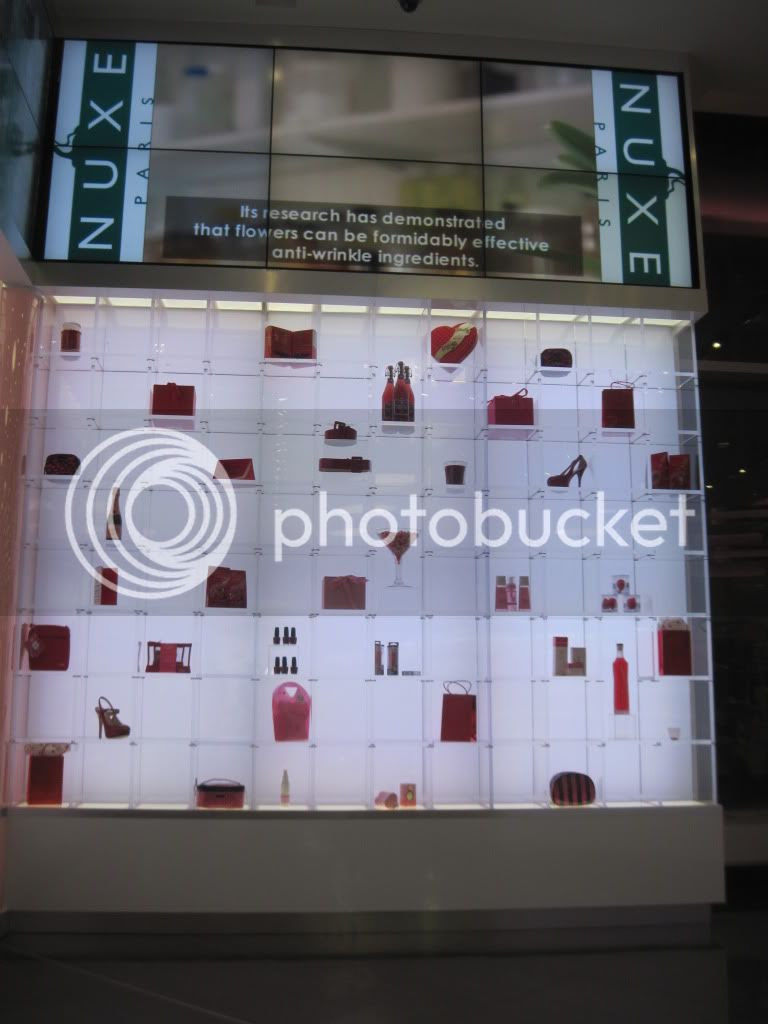 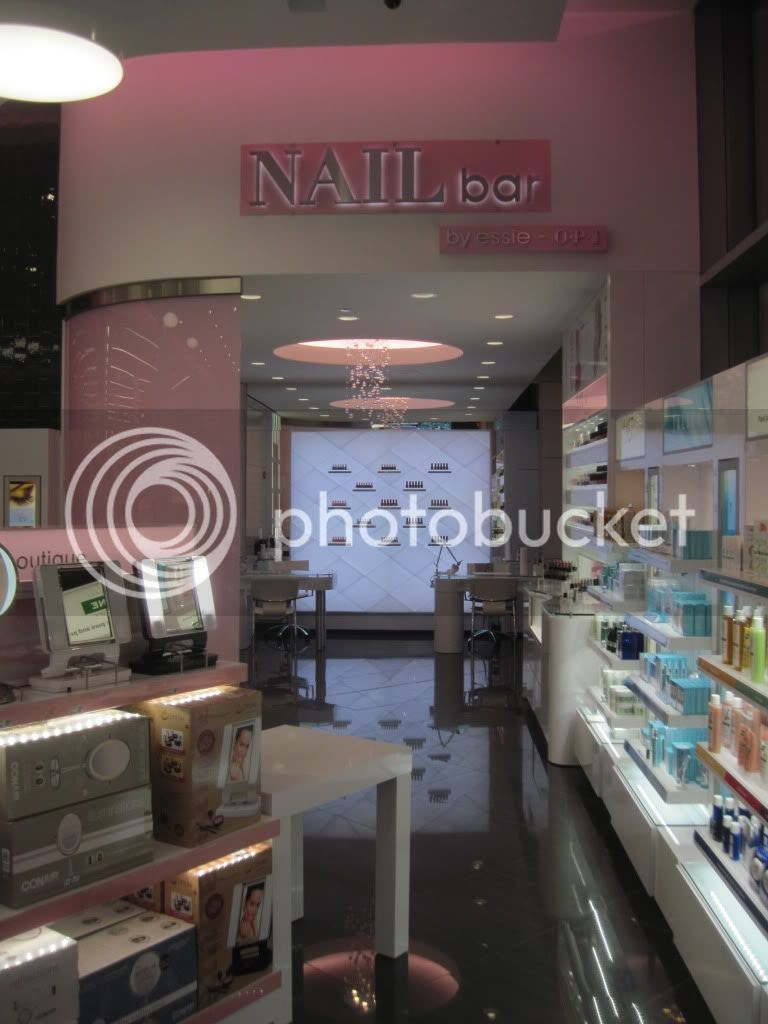 A nail bar with pedicures, and etc. starting at $10-15. Yep, inside a Walgreens! 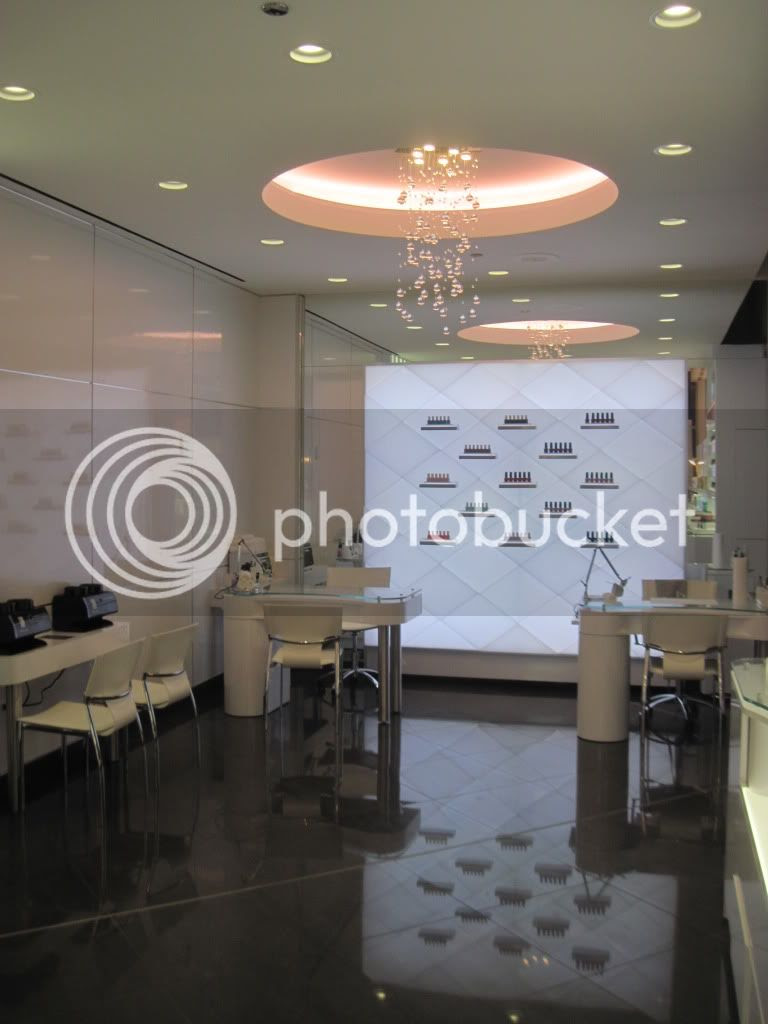 Nail bar closeup, even complete with a chandelier-like fixture in the middle of this room. Another sign with how high Walgreens set the bar, with this store.... 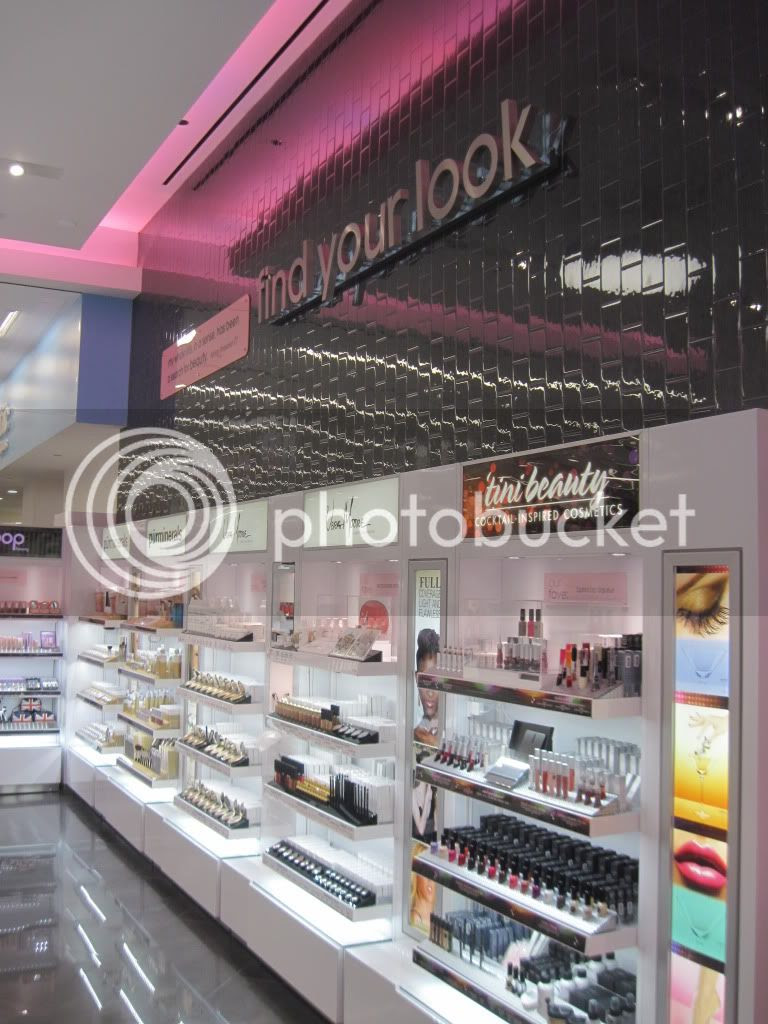 'tini beauty cosmetics? Hmmm, somehow I'm not surprised I noticed more than one martini reference in this section. :) 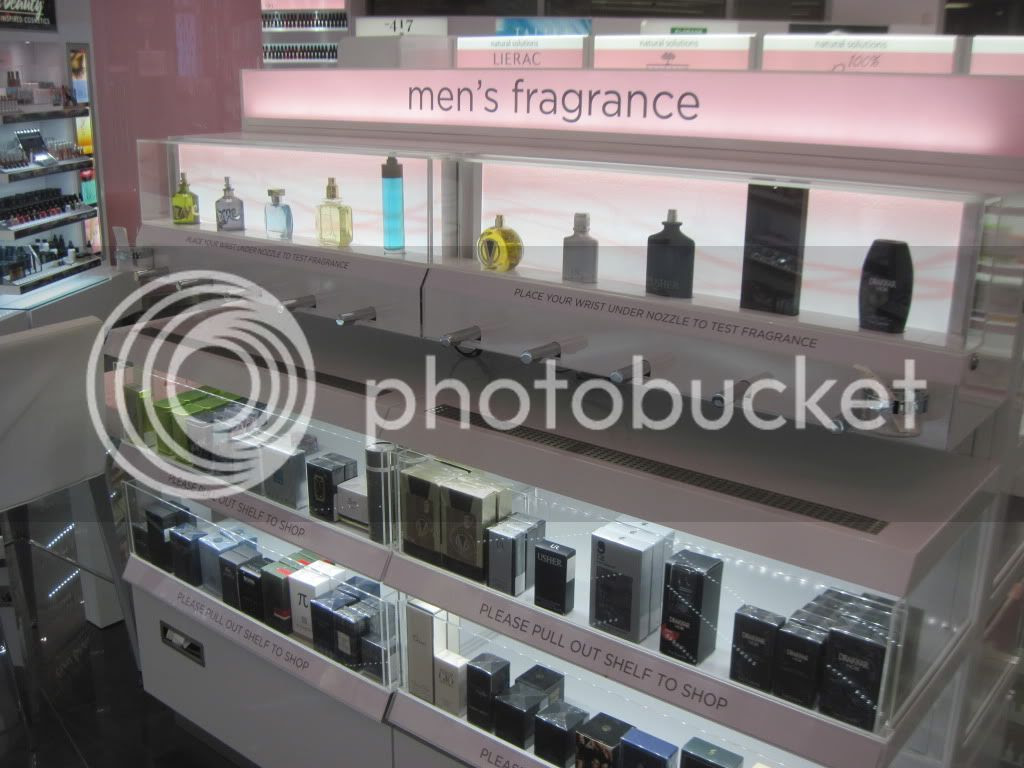 Men's fragrances self serve cologne testing counter. Yep, that is indeed what this is, though I'll pass on trying those colognes..... 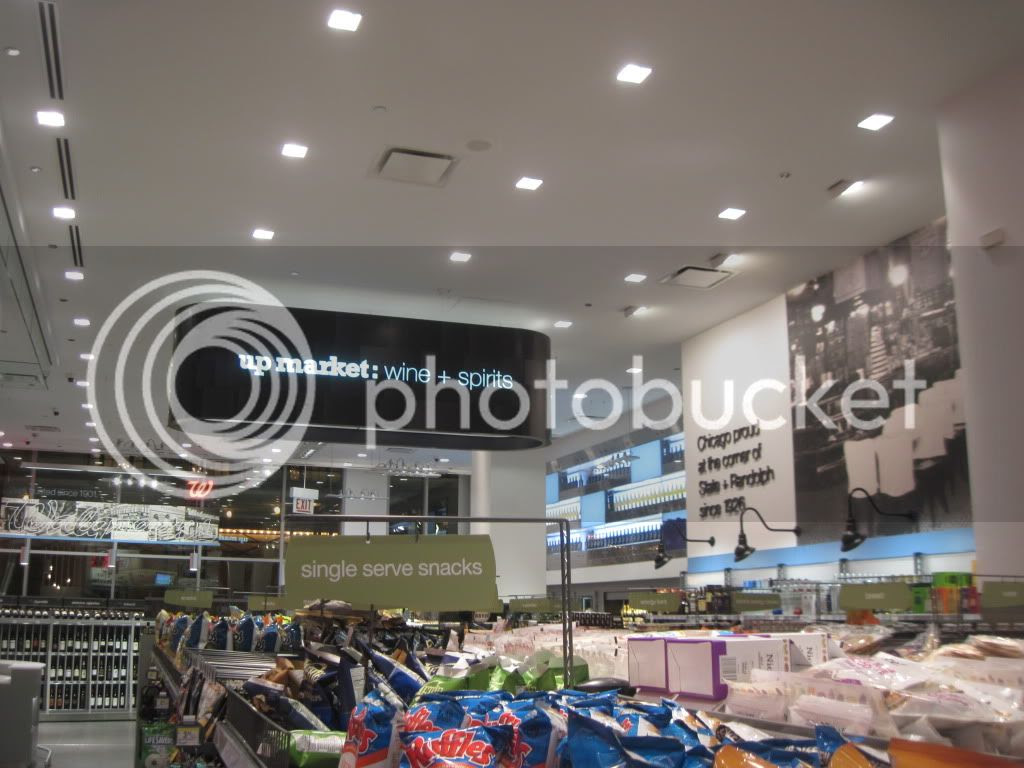 Back to the first floor again. Here's the north half of the store, with the snack section and the liquor section shown. There is a small cheese display inbetween the ends of the snack and liquor sections, that can't be seen from the far left aisle I stood at here. 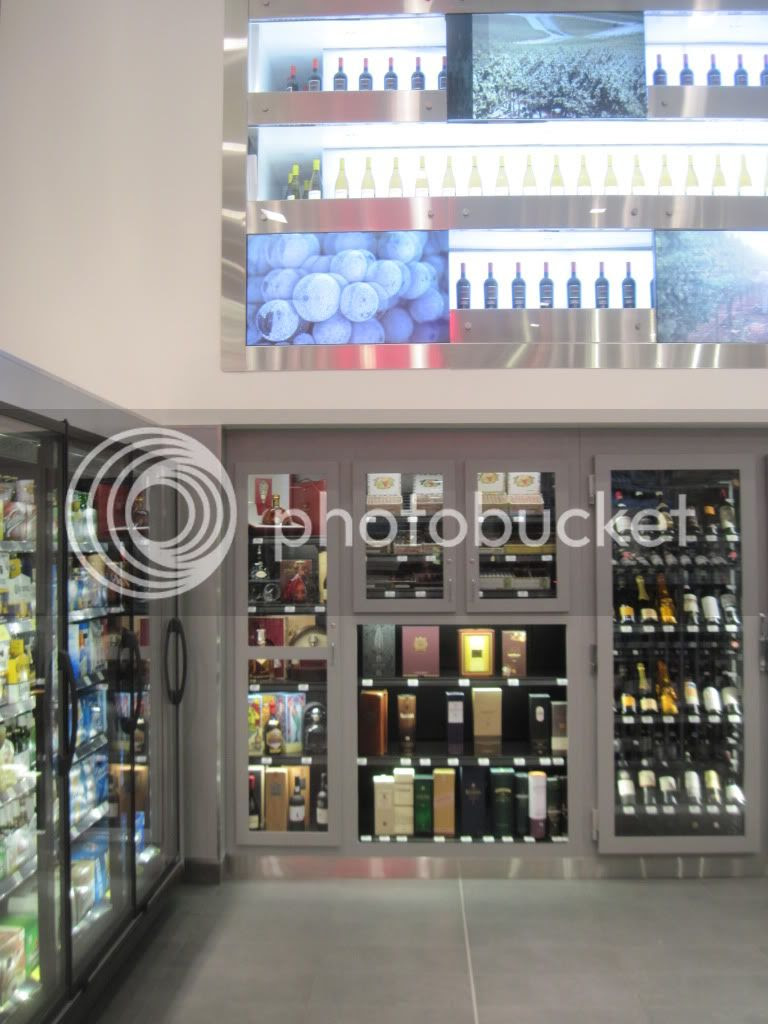 Beer coolers on the left, high end liquor case, AND a cigar humidor, all next to each other. $2000 Louis XIII Cognac, anyone? 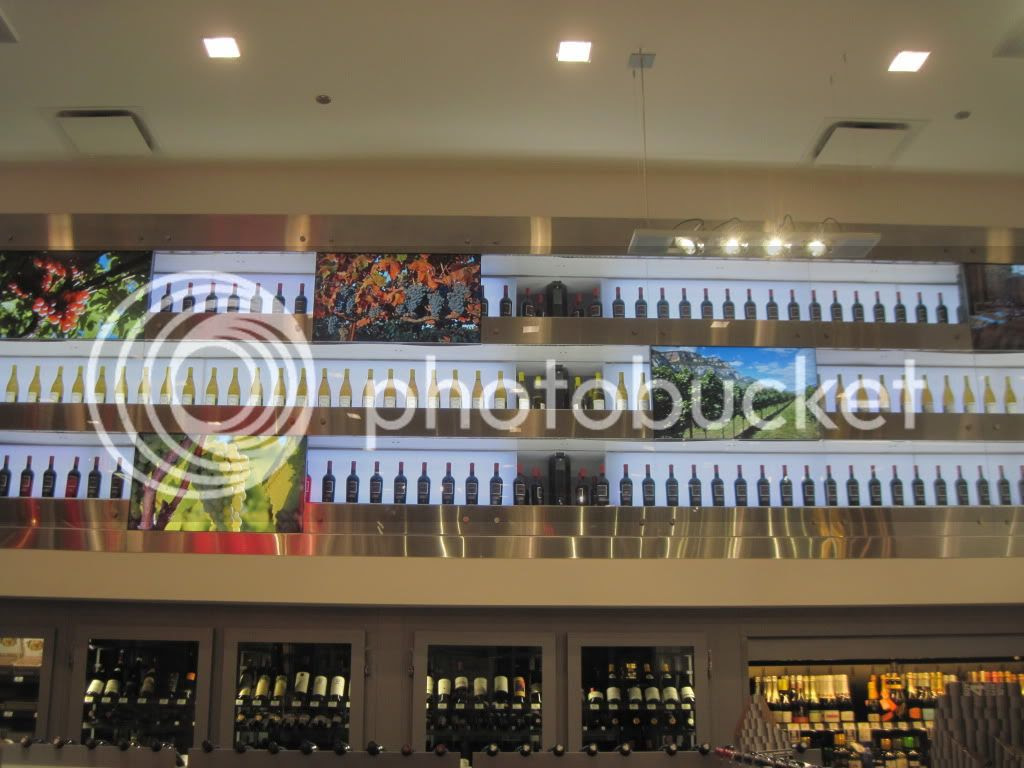 Wine bottle display, with all bottles moving left or right from the center, and computer monitor displays. This is an extremely cool display to see in person! 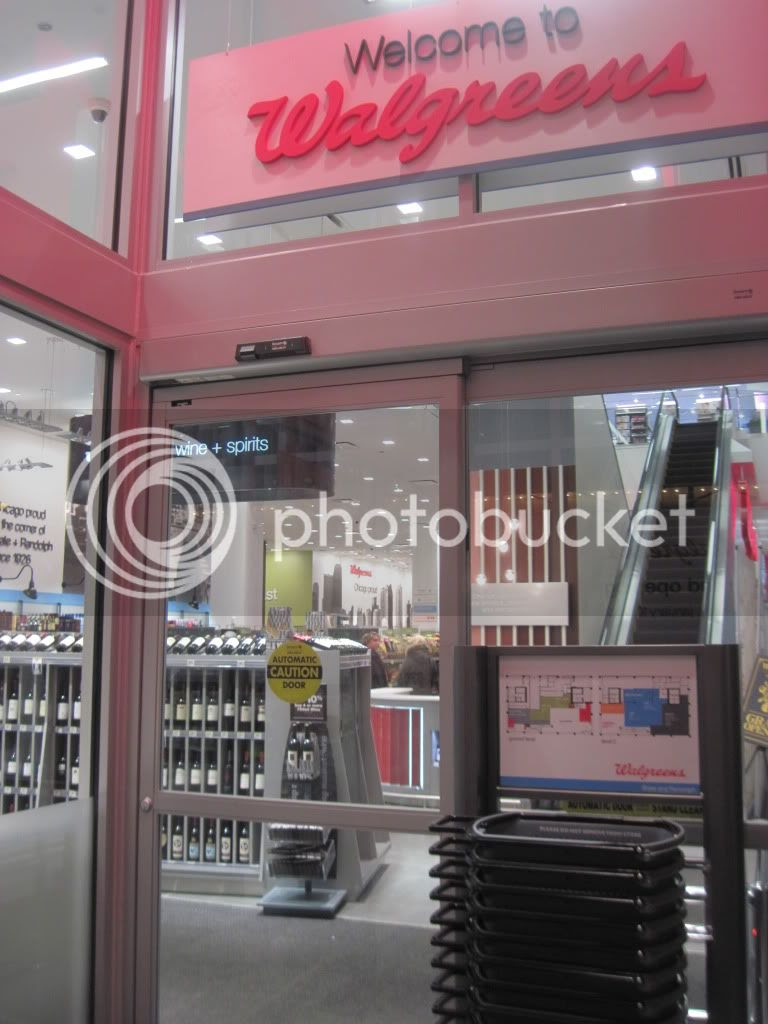 North entrance into the store, which goes directly to the liquor and wine section. 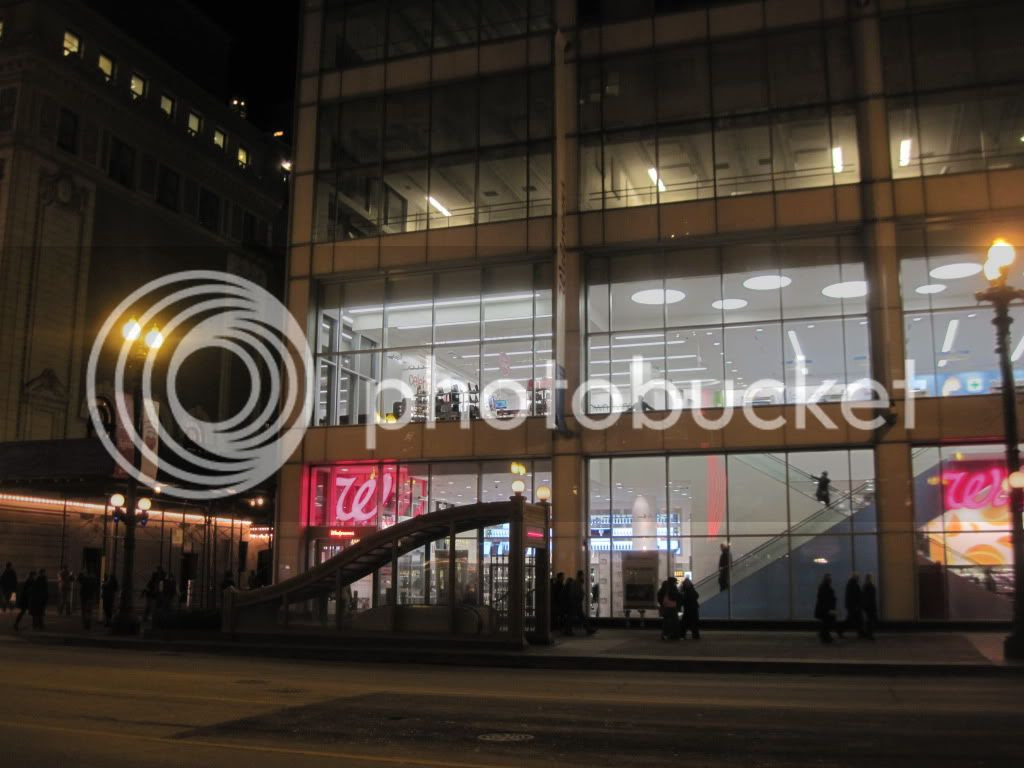 Across the street from the north entrance, with the Chicago Theater building on the left. A concert ended slightly before I shot this pic, hence the greater crowds on the street than usual. 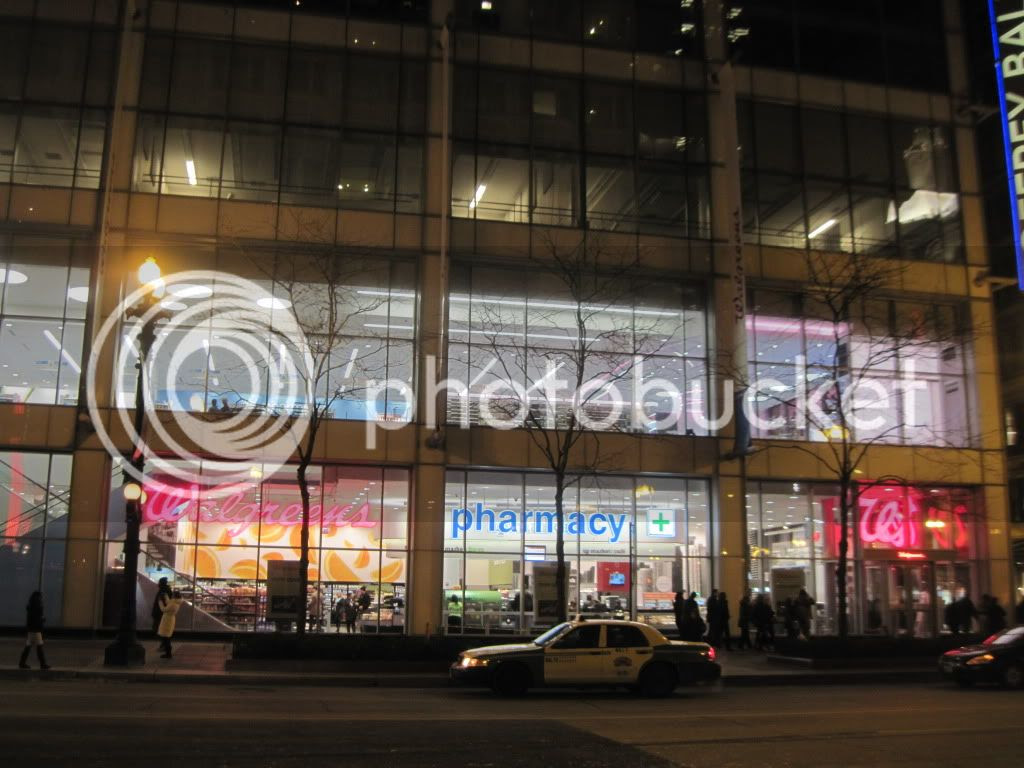 Across from the south entrance into the store. The vertical sign is for Joffrey Ballet, who moved into the upper floors of this new building.

Special thanks to NBC 5 News for this video, and these 2 online articles for providing me needed info for this entry. And you can watch and read more about this flagship store from these links, as well:
http://www.nbcchicago.com/the-scene/shopping/Walgreens-To-Open-Upscale-Store-in-the-Loop-136933713.html
http://www.chicagobusiness.com/article/20120107/ISSUE01/301079971/walgreen-goes-upscale
http://www.suntimes.com/photos/galleries/9908814-417/sushi-at-walgreens-new-state-street-store-offers-urban-format.html
Posted by Venture Into Retailing: Midwest Retail at 10:27 AM 2 comments:

And it'll be about the department store chain Goldblatt's. Sorry for the lack of posts since my introductory post, as it's because I want to ensure that posts I make here are thorough, carefully researched, and I cover as much ground as I can in each post. Plus, I am hoping to get permission from various photographers if I can use their pictures for posts here, when it comes to things I do not have pictures of(if I do use any pics, the photographer will get full credit for the pic, and I will ask for his/her permission first). I'm hoping to get that one up no later than Christmas, and perhaps within the next 1-2 weeks. After that, the next chains I'll cover will probably be Bergner's, K's Merchandise, and Wieboldt's(haven't determined the order I'll write about each of those chains yet). There are a lot more I'm considering writing about, as well(i.e. Famous Barr, Stix, Baer, and Fuller(yep those 3 words are the full name of that department store chain), L. S. Ayres, Hudson's, etc.). I'm not sure of the order I'll do those chains(and many more store chains I haven't mentioned), but I hope to cover them all at least sometime in 2012.

Shopping center and mall entries will start either in late December, or (more likely) sometime in early 2012. Thank you for your patience during this time.
Posted by Venture Into Retailing: Midwest Retail at 1:28 AM 1 comment:

welcome to Venture Into Retailing!

Yes, this is the official first post of the official Venture Into Retailing: Midwest Retail blog, and I'll be doing many more from here on out. This of course will be about past and present retail-related stuff, malls, shopping centers, defunct chains, retail chains that merged, etc. throughout the Midwest, and I'll also accept Northern Plains stuff too, including if it's in the western part of any of those states). I first considered this idea about a year or 2 ago, and even came up with this name, but really laziness was the only reason I had not gotten around to getting this blog up, till now.

Ultimately, I'd like to have decent coverage of all Midwest and Northern Plains states(North Dakota to Kansas), but I know they'll be some states that I probably won't get to for a great while(namely the Plains states), and/or cities(i.e. Des Plaines, Omaha, Fort Wayne, etc.) I wouldn't mind visiting down the road. Because of that reason, I will do some occasional guest writer/submission entries about malls and shopping centers in states I may have difficulty getting to in the immediate future(i.e. the western parts of Iowa and Minnesota, most of Missouri, etc). If you have a Midwest shopping center or mall that you are particularly interested in doing a guest entry for(yes it can be any mall/shopping center you want, as long as it's in the Midwest or Northern Plains. THINK like how a guest entry on the retail blog LiveMalls usually looks like, though I'll probably accept them too if they are just in the style of an email to deadmalls.com), email me at ventureintoretailing@gmail.com

That said, I will be doing a lot more stuff here soon. Stay tuned, and feel free to follow this blog if you want.
Posted by Venture Into Retailing: Midwest Retail at 8:14 AM 3 comments: